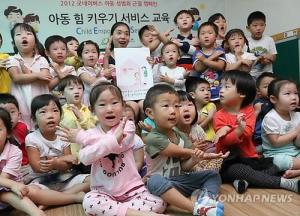 Under a government plan to expand public welfare benefits and help relieve families of the financial burden of childcare, all South Korean households with kindergarten children between the ages of 3 and 5 will be paid 220,000 won (US$196) per child every month. The Ministry of Education, Science and Technology, has announced that the monthly childcare subsidy for families with 5-year-olds attending kindergarten or daycare centers will rise by 20,000 won (US$18) per child from the current 200,000 won (US$179). Young children not at kindergarten or daycare centers will not be covered by the subsidy program.

Link to article (in Korean)