For those who grew up in the 1970s and 1980s, Sesame Street is a ubiquitous example of the intersection where television and education meet.  The show has welcomed diverse viewers to a mixture of educational sketches, songs, and memorable characters. Lesser known about Sesame Street is the fact that Sesame Workshop is a nonprofit educational organization focused on researching and creating media for kids across the world. In many different countries, Sesame Workshop has created versions of Sesame Street that address issues specific to regions. For instance, in South Africa, Takalani Sesame features Kami, an HIV positive Muppet.

In addition to these and many other programs, Sesame Workshop and the International Rescue Committee (IRC) were recently awarded a $100 million grant as part of the MacArthur Foundation’s 100 & Change grant competition. Kim Foulds, Senior Director of International Research and Evaluation for Sesame Workshop, explained that the grant grew out of a partnership with IRC  to develop programming for refugee children fleeing the ongoing conflict in Syria. With Sesame operating as the content provider and IRC working as the implementing partner, in 2016 the two organizations began developing programming that would bring early childhood education to “young children displaced by conflict and persecution in the Middle East.” Foulds describes this relationship as typical for Sesame Workshop. Partnerships allow them to create content with on the ground support rooted in local knowledge, deepening the impact of educational efforts and direct services.

Using seed funding from the Open Society Foundations and the Bernard Van Leer Foundation, Sesame and IRC piloted the initial program in Jordan that targeted Syrian refugees at some centers near the border. Considering the impact of issues like displacement or violent conflict, the organizations wanted a response targeting both young children and families. Sesame and IRC aimed to create an Early Childhood Development (ECD) program.

Starting the project, Sesame Workshop sent a team to Jordan to test different Arabic-language Sesame content with Syrian children and their caregivers who had been displaced by the conflict. In those explorations, Sesame identified desirable themes for potential Sesame shows and looked at which platforms would be most effective to deliver content that would begin to help fill the early childhood education gaps faced by Syrian children ages 3-6 years. They also worked through IRC’s existing programming to deliver materials to support children’s psychosocial needs. All of this work aimed to create an initial framework directly focused on children and families impacted by this conflict.

In addition to developing a local version of Sesame Street, Sesame and IRC wanted to create a show and programs that would work not only in Jordan but also in Syria, Lebanon, and Iraq.  They sought to develop a program that could serve as a blueprint for future work in other crisis areas and reach millions of children. In order to achieve this goal, further work and resources were necessary. After multiple rounds and many other impactful proposals, in December of 2017, the MacArthur Foundation named Sesame and IRC as the winners of the 100 & Change grant for $100 million. When the award was announced, news outlets around the world praised the project’s vision and goals. In the months since, the organizations have begun the everyday work of scaling the project.

Though it is still early in the project’s development, Foulds offers a number of early findings. In addition to suggestions to focus on literacy and numeracy, emphasizing both Arabic and English, the initial content testing showed that the content and characters that most resonated with families focused on themes of kindness and forgiveness. They wanted characters who were good friends and could act as models for children. Children liked shorter segments, mostly with songs. From this testing, content provided during the pilot included a storybook where a bully is mean to his friends, so the friends decide to ignore him. Then, seeing him alone and sad, the friends decide to forgive him, something that caregivers found appealing and relevant. At the same time, caregivers suggested expanding this story to include the perspective of the bullied characters. The testing also revealed a desire for lessons about self-protection and ways to prevent sexual abuse as well as a call to avoid topics like suicide.

As always, Sesame aims to approach this project in culturally relevant ways, developing a localized co-production for the region. This is a core tenet of Sesame’s international work. Foulds recalls a conversation while working with Sesame Workshop in Afghanistan, in which she learned that many Afghans were not aware that the Afghan co-production was based on an American show because it had been so localized. The show in Afghanistan has Afghan producers, puppeteers, and comes from the ideas and interests of people from the area. The new show aims to reflect just as much cultural responsiveness. 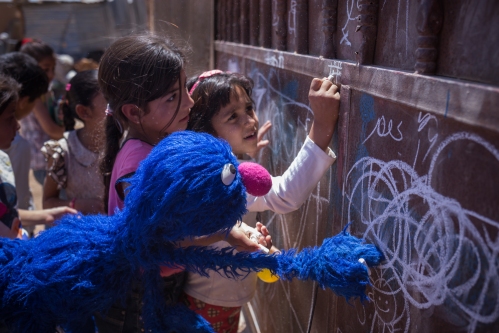 This endeavor is a continuation of Sesame Workshop’s founding principles. Foulds reminds that since their inception, Sesame has always worked with the most vulnerable children, both domestically and internationally. This includes serving children affected by conflict in Palestine, Israel, Kosovo, Northern Ireland, and now in the Syrian response region. Both education and early childhood development are largely ignored in responses to humanitarian crises. Safety, food, medicine, and shelter may traditionally take precedence over education when humanitarian crises strike. But, as technology and digital media find their way into almost every corner of the globe, programs like this one may mean that children and families don’t have to wait for support for their development or education.