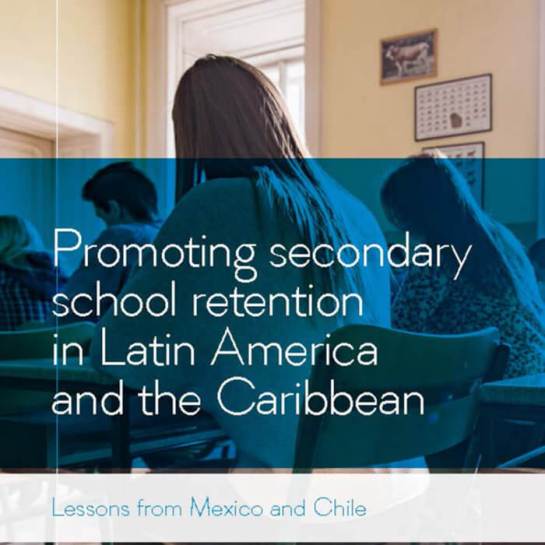 On the Mexican School System:
Mexico has a near universal transition rate from primary to lower secondary school, and nearly 90 percent of students complete a lower secondary education.2,3 High dropout rates in upper secondary school pose the most significant bottleneck to completing compulsory education in Mexico: 15 percent of young people drop out every year at this level with young men more likely to dropout than young women (17 percent versus 14 percent, respectively) (INEE, 2017). Over the last decade, several reforms have attempted to strengthen the compulsory education cycle, which includes upper secondary school since 2012, and culminated with the recent introduction of a new education model Nuevo Modelo Educativo [New Education Model] in 2017 that aims to disrupt outdated pedagogical practices and make education content more engaging and relevant.

Lessons from Mexico:
Schools inconsistently implemented both initiatives, selecting certain activities and tools as they deem appropriate. This inconsistency could be due in part to overburdened school staff, inherent variation between school systems and limited coordination at the national level. Both Construye T and Yo No Abandono started as large-scale initiatives. Neither program conducted rigorous pilots to test implementation and effectiveness of program activities, which has complicated their ability to scale up effectively.

On the Chilean School System:
Chile has shown remarkable progress in improving access and completion rates at the secondary education level for all students. Between 1990 and 2013, the proportion of youths between the ages of 20 and 24 who completed secondary school increased from 54 to 85 percent (JUNAEB, 2015). Importantly, the lowest-income groups experienced the greatest gains in enrollment over this period; however, economically and socially vulnerable youth still experience much higher rates of school repetition and early exit. The Chilean government has thus executed policies and programs to expand resources to the most vulnerable schools and students. For example, equity-oriented initiatives provide a high amount of funding to schools based on the enrollment of vulnerable students. Similar to Mexico, female students in Chile are more likely to complete secondary education than males (88 versus 82 percent, respectively) (CEN, 2014; JUNAEB, 2014)

Lessons from Chile:
In Chile’s current education governance structure where municipalities operate schools with significant autonomy from the national government, the “outsider” status of Aquí Presente’s psychosocial professionals sparked initial distrust among teachers and staff.8 Eventually, however, this external perspective allowed them to cause disruptive change and gave them more latitude to speak and act freely than other school actors. The effectiveness of Aquí Presente was also seen as attributable to the full-time nature of these professionals, whose sole task was to reduce dropout and improve school conditions. With the 2017 transition of Aquí Presente to ABE, it remains to be seen whether municipalities and schools will use existing resources to hire similarly dedicated staff.

Recommendations:
The recommendations that emerge from the study’s analysis can be placed into five categories. These are areas that warrant particular attention and should be carefully considered during the design and implementation of a strategy or program that seeks to directly or indirectly influence dropout:

For related work, IEN has produced posts on Education reform in Mexico and new programs from the CONAFE.