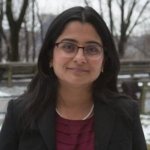 Over the past year, IEN has begun a series of interviews and events focusing on educational innovation around the world. While attention often centers on how “innovations” and other interventions are supposed to change teaching and learning, some of our interviews will highlight how the work and ideas of leading thinkers and organizations have evolved in response to the realities they have encountered. (For example, see an interview with Eric Schwarz about the changes that Citizen Schools made in order to successfully grow their model for afterschool and extended learning time and an interview with Brahm Fleisch on school improvement efforts in South Africa.) This week, we draw on a conversation with Radhika Iyengar, Director of the Education Sector at the Center on Sustainable Development at the Earth Institute at Columbia University. That conversation concentrated on how the educational initiatives of the Millennium Villages Project (MVP) in Africa have evolved along with efforts to address numerous challenges in agriculture, in health, and in other sectors.

The Millennium Villages Project was launched in 2005 to demonstrate how to achieve the Millennium Development Goals in a number of economically marginalized areas in rural Africa through “integrated, community-led development”. The project was designed to take into account the complexity of problems like poverty and to address them through inter-sector efforts to work on agriculture, health, infrastructure, education and other issues. As Iyengar put it “everything had to come together.” The work on education in particular illustrates the way work in one sector – like improving teaching and learning in classrooms – depends on and can draw from work in other sectors. In order to improve access to quality education on a large scale, the project had to deal with the facts that infant and child mortality was often high, that some children did not have adequate transportation to get to school, and those who did make it to school might be malnourished or in poor health.

Given the problems with nutrition and health, the MVP began with a focus on addressing agricultural issues in several different parts of Africa. The initial goals included improving local food supplies and making sure that farmers could be successful. Work was soon launched to tackle challenges in other sectors as well. In each case, however, “root causes” for complex problems needed to be unraveled in order to develop integrated, systemic solutions. In health, for example, the project quickly focused on key issues including the high numbers of children dying from malaria and large numbers of mothers dying during childbirth. While providing vaccines could help to address infant mortality issues, the health workers soon found critical problems with the supply-chain created by the lack of infrastructure in many regions. Thus, in order to retain their effectiveness, the vaccines needed to be kept cool when transported and stored. That created a need for refrigerators which in turn, required electricity or other power sources that were unavailable in many of the areas where the vaccines were needed most. As a consequence, pursuing the health issues, quickly merged with efforts to develop infrastructure in the villages, including establishing electricity and building health centers.

With each development, however, new challenges were uncovered. Once the health centers were built, considerable work needed to be done to make sure that the local population would take advantage of the new facilities and services. “Just creating health centers on their own was not enough,” Iyengar explained. “Mothers would not go to the health centers on their own. They were too busy. They had many other things to take care of. They had their agricultural work, their children, husbands, the household.”   Convincing mothers who were used to delivering at home to make the trek to deliver their children in an unfamiliar setting was particularly challenging.

In response to these new challenges, the MVP developed a group of community health workers, individuals from the local community who would work with the local population to help them take advantage of the new clinics, hospitals and other services. These individuals could communicate in the local languages and dialects and understood the local beliefs and norms. They visited houses, checking for malaria, testing for HIV, talking to pregnant mothers, educating mothers, checking blood pressure and assessing whether anyone needed to go the hospital. By working closely with the community health workers and a team of local officials and community members, staffer from the MVP were also able to gain key information, feedback, and perspectives that helped to identify issues and generate solutions that fit the local context.

Although these challenges in other sectors had to be addressed, they also created some unanticipated resources, lessons, and opportunities that could then be leveraged to work on other issues of education. Thus, the work on education in 2005 began with a focus on increasing access that in many ways paralleled the work in health. The challenges for increasing access to preschool and kindergarten were particularly pronounced as younger children often could not walk the long distances it might take to get to the nearest schools. Furthermore, many of the existing schools were dilapidated and in disrepair. Consequently, the work in education began by developing the physical infrastructure and building more schools and classrooms. The work proceeded with the MVP providing materials and assisting local teams who built new schools and made existing schools more functional. But as Iyengar explained, simply building more schools and classrooms was not enough to ensure that students would get to schools and classroom at the right time.

Communication was a key factor as many parents simply didn’t know what age students should come to school. Some students did not start coming to school until they were 7 or 8 years old; but sometimes students as young as 3 or 4 might tag along with their older siblings. Similarly, many families did not have information about when school started and ended or the timing of school vacations.

Building on the success of the Community Healthcare Workers in bridging the gap between households and the health centers, the MVP created groups of volunteers they called the Community Education Workers. These local team members went house-to-house discussing the school schedules and policies and identifying children ready for school (including helping families to identify when children were born and how old they were).

Through these kinds of efforts, more and more children started attending school on a regular basis. For instance, on average, of the total children enrolled in grade 3 in all schools in all sites, more than 85% now attend schools on a regular basis. As in many other countries, simply getting students through the door and into classrooms was not sufficient, however. There were still teacher shortages, overcrowded classrooms, and teachers struggling to teach large numbers of students from different grades and working on different subjects at the same time. Given the difficult conditions, even though more students were attending schools, many were dropping out. “They were either getting bored,” Iyengar elaborated, “or parents were seeing that after three or four years the students still weren’t able to read and write.” As Iyengar stated, “there are many, many policy issues, structural issues, instructional issues, implementation issues that we are still grappling with in terms of quality of education.”

One strand of the work to improve the quality of education has focused on developing the capacity to share and use information and data more productively. For the most part, educators and policymakers in the MVP communities have had little or no information on what’s actually happening at scale, across many different schools and classrooms in real time. To address this challenge, the work in education borrowed again from the efforts in health and the community healthcare workers. The healthcare efforts have taken advantage of the development of the technological infrastructure to use a variety of new technologies to carry out testing and to share information between households, local villages, hospitals and the regional centers. That information is being used to make individual diagnoses and treatment decisions and also enable healthcare workers to manage demand and supply for medicines, doctors, and hospital beds. These efforts benefited particularly from the developments in mobile technology and from equipping community healthcare workers with smartphones. In education, they have also begun using smartphones as well. In this case, community education workers use the phones to gather a wide range of data including data on the school environment as well as on student learning. For school environment the data may be as simple as “During the visit, was there electricity? Was there running water?” but the education data includes information on progress in reading and numeracy as well. As Iyengar points out, however, simply transmitting the data to some distant location for eventual analysis and reporting is often of little use to the teachers, teams, and local officials. Thus, the developments in the use of the mobile technologies and assessment at the school level, now go hand in hand with the development of monthly meetings where the local data can be examined, discussed and used to guide decision-making. For example, this data was used to identify and address problems with teacher absences and with low levels of reading in Mali and Ghana respectively. From Iyengar’s perspective, there are often relatively simple solutions that local teams can identify, but solving the problems depends on both on the development and use of the new technologies and the development of social communication networks that link communities with one another and with the regional and national education officials.

Part of the challenge that MVP faces is common to all those working in schools: efforts to increase efficiency and improve performance at one level of the education system – classroom or school – are still constrained by conventional policies and practices at other levels. Thus, in many cases, the educational issues that the MVP works on are also complicated by the histories and conventions of the national education systems. For example, the regional or national languages like French or English often serve as the language of instruction. But many students and teachers do not speak the language of instruction and books, textbooks, and other instructional materials are often not available in the local dialects. As a consequence, educational improvement efforts like those of the MVP face the dual challenges of trying solve problems that are created by the conventional structures of schooling at the same time that they work to increase access and improve quality within those conventional systems. (For more on these issues, see reflections on and discussions of innovation/improvement in Finland, Mexico and Colombia, and Singapore.)